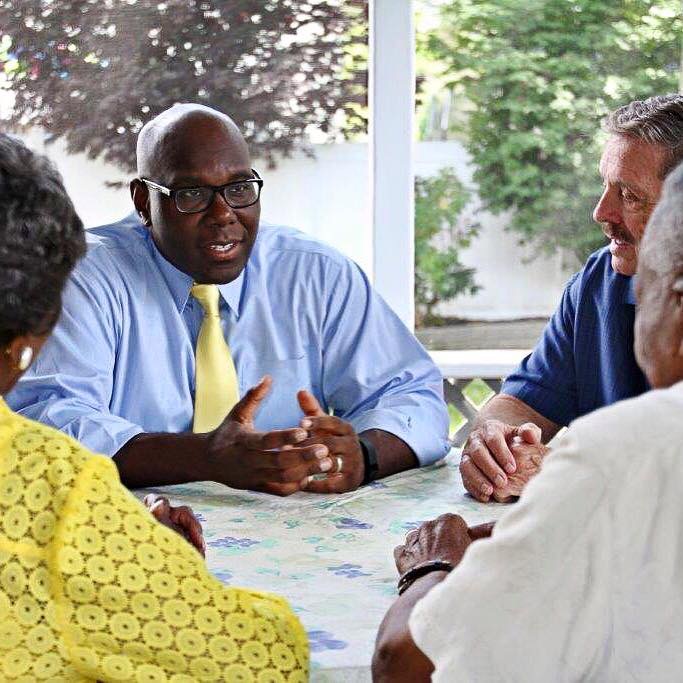 Senator Troy Singleton has devoted his life to public service in government, political, and policy posts at all levels. His rapid rise to the highest levels of management in the New Jersey Legislature and as an elected official is a testament to his widely praised talent for assessing, developing, and implementing legislative responses to major public policy challenges.

Troy graduated with a degree in business administration and finance from Rowan University. He began his career as Legislative Director for New Jersey Assemblymen Herb Conaway and Jack Conners in the district he would come to represent. He was honored to then serve as Deputy Executive Director of the New Jersey General Assembly Majority Office and Chief of Staff under the highly respected Assembly Speaker Joseph J. Roberts, Jr.

In 2011, he was elected to his first term in the New Jersey General Assembly, representing the 7th Legislative District. Elected to the New Jersey Senate in 2017, Troy now serves on the Senate Community & Urban Affairs (Chair), Economic Growth (Vice Chair) and the Budget & Appropriations Committees. During his time in office Senator Singleton has had a significant number of proposals signed into law. Among them are proposals to completely overhaul New Jersey’s economic incentive programs, upgrade our facilities of higher education to attract and retain the best and brightest of our State, the establishment of the Helmets-to-Hardhats pilot program to help unemployed former military personnel find jobs in the construction industry, and the creation of a Small Business Loan Program in the EDA to allow small businesses to be eligible for low interest rate loans to expand. His primary focus remains on job creation, economic development and the needs of New Jersey’s working families. Senator Singleton has received numerous awards for his public service and legislative acumen from business, education civic, labor and non-profit organizations.

Along with this busy career, Troy is a devoted husband and father of three who has long included personal involvement in his community as an essential component of his life. He is a past board member of Rowan University, the Boys & Girls Club of Camden County, New Jersey Council for the Humanities, the Burlington County Library Foundation, and the VFW Post #3020 Men’s Auxiliary, the Garden States Arts Foundation, the Trenton Civilian Emergency Response Team, and a volunteer coach with the Pennsauken Youth Athletic Association. Troy has also served as a Commissioner on the New Jersey Turnpike Authority. He currently serves as a Commissioner on the Burlington County Bridge Commission, as Co-Chair of New Leaders Council New Jersey, Shekinah Lodge #32 Prince Hall Affiliate and as a member of Phi Beta Sigma Fraternity Inc.

My office takes great pride in assisting constituents. We will do our best to help anyone who calls, writes, emails or visits my District Office. If you have a question, problem or concern on any state government issue, please tell my office about it. I'll try my best to answer it for you. And, if I don't have an answer, I'll work to find one for you.